Mammoth Gravity Battles, an indie game about gravity and space-faring prehistoric elephants stomps on to Android.

Woolly mammoths, piloting flying saucers, taking turns to aim shots in a fully three dimensional gravitational field made up of stars, planets, asteroids and wormholes. Mammoth Gravity Battles combines turn based strategy with the artillery concept pushed further than any previous game. Worms and Angry Birds etc. play a 2D artillery game in a 1D gravity field (gravity just goes down). Mammoth Gravity Battles plays a 3D game in a moving 3D gravity field with all teams shots firing simultaneously. This is NASA rocket scientist hard, something players will never have experienced before. A robust single player campaign gradually introduces the game elements and teaches the secrets of gravity, known previously only to Stephen Hawking. By the end of these story missions, players find that the complex estimations are instinctive and a mammoth space warrior is ready to destroy three friends in multiplayer battles on one device - pass and play. If it's all too much there is an easier flat mode where all the objects are confined to a plane, which makes for faster, fun games.

Posted by SpaceMammoth at 02:05 No comments:


Posted by SpaceMammoth at 11:58 No comments:

So whats up with the ratings we get for our games? I find the ratings I see for other games to be a little bit random. Gone crazy and lost all my money at the casino, random. Its fine, until you realize that the rating is so so so important to the success of your game.

So I have an old Java Web game - Gravity Battles, that I have on two a few sites about the internet:

So what does that tell us? Not a-lot. The public rate my game between 2.56 and 4.7 out of 5 on different websites with Kongregate being the toughest crowd and GameJolt being the most kind. I'm never going to make any money from my game on these websites, so why do I care? Because I am building the sequel Mammoth Gravity Battles which has its game-play firmly rooted in Gravity Battles I need to know what people like and don't like, but clearly ratings are giving me no clue to that.

So you think I'm obsessing over ratings when I shouldn't?  Just wait till I get Mammoth Gravity Battles released, then you will see obsession ;-)

Posted by SpaceMammoth at 01:40 No comments:

This is the blog charting development of Mammoth Gravity Battles, a modern 3D game based on the classic turn based strategy/artillery game Gravity Wars. I'm very excited about Mammoth Gravity Battles, its going very well so far. The game will feature turn based space battles with up-to 4 player battles vs computer or friends, multiple weapons and a story/campaign mode. 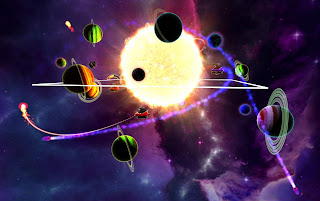 Posted by SpaceMammoth at 06:39 No comments: